Barq has participated in the International Conference held at Granada, Spain, through its Chief Executive Officer (CEO) Mr. Saleh Youssef, the conference that entitled :” extremism and violent extremism” organized by Euro-Arab Foundation for Higher Studies (FUNDEA), in the presence of a group of academics, decision-makers, and representatives of leading research centres and universities in Europe, United State of America, Middle East, and the Balkan States. In her opening address to the conference, Inmaculada Marrero, Euro-Arab Foundation for Higher Studies CEO, highlighted the main reasons for launching this conference alongside with its role in reconciling the various opinions among decision-makers, researchers and institutions of different countries for purpose of eliminating ideological extremism.

Dr. David Webber, the researcher and professor at Virginia Commonwealth University, according to face-face interviews with some of the returnees attributed the reason that pushed the foreign fighters belonging to western communities to join these terrorist groups, to the absence of respect and appreciation for them as individuals, therefore, they decided to join these extremist groups because it is the way to gain the self-respect inside these communities. As for the researcher Danil koehler, German Institute on Radicalization and De-radicalization Studies (GIRDS) in German, who stressed the importance of rehabilitating the foreign fighters inside European communities, as they are European citizens need better practical methods for combating the extremist ideologies. With regard to Dr. David Malet, the manager of Security Policies Program, George Washington University, who mentioned some of historical contexts relating to the foreign fighter term, as it is a familiar term pertaining to the phenomenon that was highly active during the period of the 1980s, when there were many individuals being joined the armed groups whose ideology is similar to (Communism, capitalism, and religion) as in Afghanistan and Palestine.

In this session, Mr. Mohammed Abd El Wahab Refky, the head of Almizane Centre, Morocco, presented his experience when he joined Al-Qaida in Afghanistan at the age of fifteen until his return to Morocco to serve as Imam and preacher in a mosque, as he imprisoned for allegedly embracing extremist ideologies, which lay within the solidarity with Jihad, then he had been released under a royal pardon after nine years in prison, this period was enough to make him change a lot of beliefs and thoughts that he believed in the past.

Dr. Al Nifar Ahmedah, the head of Culture and Pluralism Association – Tunisia, explained that there is a discrepancy between Arab regimes and their people at the level of modernization. Accordingly; this discrepancy has a major role in the emergence of extremism and violent extremism in Arab communities as a whole. At the end of the second session, Mr. Saleh Youssef , Barq CEO, Presented research paper entitled “dismantling the extremist ideologies, and Community Peacebuilding” the paper focused on the root causes and underlying motives behind the extremism in Middle East and North Africa region, that include the repressive regimes in the Middle East and North Africa (that created the terrorist and extremist groups as a justification for combating them), in addition to the political marginalization in the region (non-development policies, neglecting the investment in service oriented architecture). At last, the importance of the Middle East has been raised in the session , besides the failure to establish sustainable peace in the region.

At the end of the research paper, there was a set of steps for separating and dismantling the extremist environments through the following:

“The Extremism and Violent Extremism in the Balkan States“

The researcher, Skënder perteshi, Kosovar Center for Security Studies (KCSS) –Kosovo, noted that the main reasons that pushed the fighter of Kosovo to join the armed groups in Syria are their desire to realize the dream of Syrian fighters pertaining to regime change that they could not change it in Kosovo, while the manager of Berghof institution Ms. Engjellushe Morina presented the works and activities of the institution in the areas affected by internal conflicts and wars such as Yemen and Kosovo.

“ The Extremism and Re-recruitment inside Prisons”

The session has been held in the presence of some of experts and academic figures such as: Sergio bianchi, the representative of Ministry of Justice – Italy, Pedro das Neres, the chief of Innovative Prison Systems IPS, that it is an institution concerning with preventing the extremism inside Portuguese prisons, Alvaro Vicente, Elcano Royal Institute, Salvador berdun, Prison Management Association – Spain, and Sybille Genot, the manager of Justice Directorate affiliated to (SPF)- Belgium. All the attendees indicated by using the statistics and numbers that prison is no longer the most effective means to dismantle the extremist ideology or to change terrorist beliefs (foreign fighters) returned from Syria, Iraq, and Afghanistan. Hence there is a need to various communication processes within the community to dismantle this ideology and reintegrate those individuals in the community, alongside with the role of the narrow circle such as the family and close friends in this process. In addition to, Information exchange system in European Union EU that enables police agencies and intelligence services to reach the potential cases and to deal with them rapidly.

On the margins of the conference, a lot of Participants and lecturers has been interviewed, some of them were: Simon minks, the Chief of Prosecutions working in European Judicial Network, the manager of Berghof Institution, Ms. Engjellushe Morina, researcher Skënder perteshi, Kosovar Center for Security Studies – Kosovo, Professor David Webber, Virginia Commonwealth University, Dr. Al Nifar Ahmedah, the head of Culture and Pluralism Association – Tunisia, as the works and activities of Barq has been introduced for them, besides exchanging the opinions around the papers submitted to the conference and its importance to conveying accurate picture of the phenomenon of the extremism in the Middle East and Africa region. 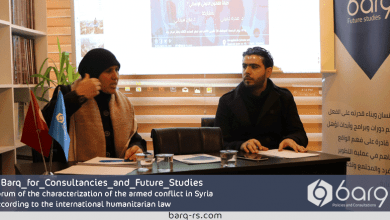 Workshop “the woman and the political participation in Algeria: political exploitation or rehabilitation?”

The third dialogue workshop: Challenges of managing the racial and sectarian diversity in the society 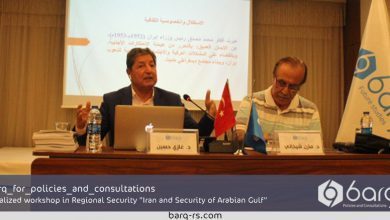 The workshop of Iran and the Security of Arabian Gulf