Throughout the past year, the media was reporting that there is a new development in the petroleum and natural gas situations in Egypt weather in terms of production, or fuel costs that are on the rise since July 2014. At the production level, it was announced that, Al Zohr field for natural gas entered the production phase. Therefor; Egypt will be self-sufficient in gas after the completion of the production phase in Al Zohr field[1], according to some estimates. In terms of the increase in cost, the Egyptian market in early July 2019, both at the domestic and commercial consumption level, witnessed an increase in the cost of fuel at rates ranging between 16% and 30% [2].

At the same time, It has been argued that Egypt would become self-sufficient of natural gas. However, An agreement has been announced between Egypt and Israel whereby Egypt will import gas from Israel for a period of ten years in consideration of USD 15 billion. Therefore, Egypt through its private sector companies, will liquefy the imported natural gas, and use it in the local market or export it to Europe, in the hope that it will become a regional center for gas trade, as it counting on this agreement in terms of its aspirations to obtain high added value.

However, what is the real situation of the petroleum and natural gas in Egypt? in regard to production and consumption rates, in addition to, Egypt’s policy towards liberalization of energy prices under its agreement with the International Monetary Fund (IMF) in November 2016, and in regard to Egypt’s petroleum and natural gas imports and exports as well. This article deals with clarifying the truth of these axes through figures and data issued by the Egyptian government.

According to Egyptian Ministry of Petroleum data, the energy sources of raw materials indicate that gas represents 55%, petroleum 41%, coal 1%, and hydro power 2% [3]. these figures indicates that, natural gas has become the biggest part of Egypt’s energy strategy.

According to the latest statistics issued in June 2019, Egypt’s total petroleum and natural gas production reached 88.29 million tons during the period between April 2018 and April 2019, while the level of consumption is about 84.17 million tons, which means there is a surplus estimated at 4.12 million tons [5].

It is noted, though, Egypt’s production of petroleum and gas is not an exclusive property, as the above production includes a share for the foreign partner close to 40%. In some agreements, the foreign company, British Petroleum, owned the natural gas field by100% in return for selling the production of the well in the North Delta in the local Egyptian market. Hence, it should be taken into account that Egypt will remain an importer of petroleum and gas despite the a surplus in production, as a result of the calculation of the foreign partner’s share in production.

This decline could be attributed to two reasons, the first reason: the production sector go through recession, as evidenced by the “Purchasing Managers Index” for the month of June 2019, which issued by Emirates NBD on the performance of the non-oil private sector, where Egypt scored 49.2 degrees in June 2019 [4]. This mean there is a continuing recession, according to the same index that categorize obtaining a degree below 50% means recession, this situation is persistent in Egypt since 2017. The second reason: The cost of fuel consumption is high in Egypt, especially after the government implemented the terms of its agreement with the International Monetary Fund to liberalize fuel prices.

In what could be a preparation for Egypt’s dossier to enter into an agreement with the International Monetary Fund, Egypt started in July 2014 to adopt a policy of reducing fuel subsidies, as the subsidies of the petroleum materials contained in 2013/2014 budget was estimated at EGP 126 billion, it has been reduced to EGP 51 billion in the 2015/2016 budget[7].

However, after Egypt entered into the effective implementation to its agreement with the International Monetary Fund in November 2016, the currency was decreased by approximately 100%, Therefore, petroleum subsidies have returned to rise again to reach EGP 115 billion in 2016/17 budget. There is no need to indicate that this rise is fictitious, due to the difference in pound exchange rate, resulted from the devaluation of the Egyptian currency. in the 2019/2020 budget, fuel subsidies fell again to reach 52 billion pounds [8].

According to the terms and provisions of the IMF agreement with the Egyptian government, Egypt should completely get rid of petroleum subsidies by the end of 2019, which will put a huge burden on the he Egyptian economy, and cause economic and social burdens through raising the inflation rates.

The subsidy of petroleum materials in the Egyptian budget is one of the problems that some economists object, as a large part of this subsidy is not real. The government is evaluating its domestic production at international prices, and the difference between local and international prices is subsidized to the citizen, while the correct calculations require the inclusion of this difference in relation to imported petroleum or gas, not locally produced.

According to the policy of liberalizing the price of petroleum products in Egypt, an economic impact has reflected on the production of goods and services in Egypt, and caused the increase in the production costs, which led to weaken the competition of Egyptian products in the domestic and foreign markets. The latest evidence of these damage is that non-oil commodity imports to Egypt increased during the last period, in 2017/2018 these imports increased by about USD 3.6 billion [9] and also during the first nine months of 2018/2019 these imports increased by 4.4%. [10] With the end of 2019/2020 data, these imports are expected to witness another increase, exceeding USD 4.4 billion.

Egypt’s exports and imports of petroleum and natural gas

The emergence of deficit in the trade balance of petroleum and gas in Egypt became normal since Egypt became a net importer in 2008. However, It was remarkable that in 2018 the discovery of a field in the Mediterranean waters was announced, as well as signing an agreement with Israel to import natural gas, but the picture of the trade balance of petroleum and natural gas remained unchanged, remained negative, and the deficit in 2017/2018 was about USD 3.7 billion. Even in the first nine months of 2018/2019, as it is assumed that it witnessed a remarkable development in the production of Zohr field of natural gas to reach the production today to 2 billion cubic, but the deficit in the balance of trade in petroleum and natural gas remained, even if its value has diminished, but the lesson remains in 2018/2019 at the end and in completion to the data of the last quarter of it.

It is important to note the fact that the nature of the figures for the Egyptian exports of petroleum and natural gas has changed, then such deficit can be reflected on the real deficit of the trade balance, as a result of the Egyptian exports of petroleum and gas include a share for the foreign partner [11], which of course not less than 40%, which means that the trade deficit in this case will increase because of the value of the share of foreign partner that calculated in the value of exports.

The petroleum and gas issue becomes a crucial issue in the Egyptian economy in the forthcoming period. Especially as the government targets to obtain a growth rates up to 6% in Gross Domestic Product (GDP), this will increase the demand for oil and gas, and may be a reason for the consumption of a greater amount of the expected increase in domestic petroleum and gas production, In fact, the trade deficit may persist due to the continuation of the import process to cover the requirements of the local market, and poses other challenges to the Egyptian government, including the fulfillment of foreign exchange requirements to cover imports, which is another burden on the local currency exchange rate.

Even if the Egyptian government does not succeed in achieving its GDP growth targets, It faces the challenge of overpopulation that needs to be taken into account when developing a country’s petroleum and gas strategy, and determine import and export shares or even reviewing some contracts and quotas of foreign partners.

Copyright © 2019. All Rights Reserved for Barq for Policies and Consultations 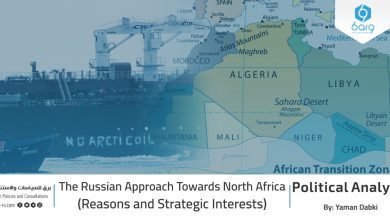 The Russian Approach Towards North Africa